Following are at the core of what a Feng Shui consultant studies. In order for a subject to be considered a classical Feng Shui subject, it should embody these core subjects:

The Tai Ji is the iconic symbol comprising Yin and Yang, with each containing the seed of its opposite, indicating that Yin and Yang are dynamic and relative.

The concept of Yin and Yang is fundamental to the study of Feng Shui, Chinese Metaphysics and Chinese Medicine.

Yang can be translated to mean the sunny side of a hill or river and Yin the shady side of a hill or river. Light and dark, hot and cold, summer and winter, male and female, left and right, high and low are common examples and manifestations of yin and yang. These seemingly polar opposites are complimentary and relative to each other. There is only light because there is dark, each requires the other to exist.

Yin and Yang are engaged in a constant cycle of transformation and change. Feng Shui like Chinese Medicine seeks to maintain harmony and balance between these changing forces.

Cities, villages and buildings are located, sited, orientated and designed in order receive the beneficial influences of Mountains and Water courses.

Classical Feng Shui schools use compass formulas in conjunction with the topography to identify where the forces of Yin and Yang, Mountains and Water are harmonised in order to find the best location in which to live.

The ‘cosmic trinity’ of Heaven-Man-Earth is a fundamental principle applied in many different ways in Feng Shui. It is used in destiny analysis, to describe our different types of luck (see Destiny), to determine which direction a house faces, when renovations are carried out it determines whether they were sufficient to change the age of the house. In the San He Luo Pan, there are also three identical 24 Mountain rings which are at odds of 7.5 degrees and are called the Tian Pan (Heaven Plate), Ren Pan (Man Plate) and Di Pan (Earth Plate).

According to Howard Choy in his paper THE “SAN CAI” APPROACH TO FENG SHUI ANALYSIS AND DESIGN,

“Zhouyi 周易 or the Book of Changes was the earliest written source to describe the San Cai 三才concept of Tian 天, Di 地 and Ren 人 or Heaven, Earth and Human as being “San Cai Zhi Dao” 三才之道 or the Dao of the Three Abilities.

By looking at the various layers relating to these three concepts of what is above, what is below and what is in the middle in a Feng Shui situation, one can come to an understanding of the Ben Xing 本性 or the Original Character of a site and is able to take advantage of what is desirable or auspicious (Ji 吉) and avoid what is undesirable or inauspicious (Xiong 凶), without destroying the natural context and being Ziran自然 or Self-Thus at the same time.”

The five elements consist of: 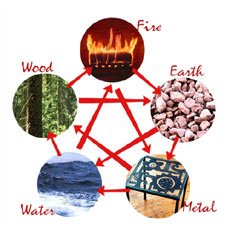 The five elements are an integral part of the foundation theory of Feng Shui and represent five types of qi prevailing one after another. It is said the five elements contain all the ‘10,000 things in the universe’ and therefore can be said to be a model of the universe which is cyclical yet forever changing.

The five elements represent the reccurring natural cycles of seasonal change, moon phases, day and night, emotions, body parts, and amongst many other things, even life and death. These elements relate to the environment in which we live.

The elements can work to enhance each other and promote growth and the cycle is inherent in nature. But they can also have a controlling relationship. It is up to your Feng Shui consultant to make sure they implement the correct element when advising remedies.

The Ba Gua is fundamental to Feng Shui, Chinese Medicine, Martial Arts and Metaphysics. Ba Gua means the 8 symbols or trigrams. These also originate from the Zhouyi 周易 (Yijing, I Ching), the Book of Changes.

Evolution of the Ba Gua:

The Ba Gua consists of 8 trigrams, the 8 trigrams are all the permutations of three Yin and Yang lines, hence the name trigrams. The trigrams are arranged differently in the Xian Tian and Hou Tian Ba Gua. 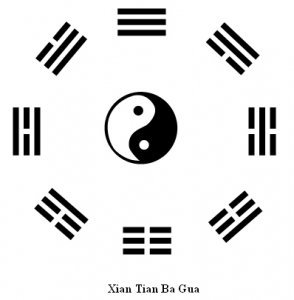 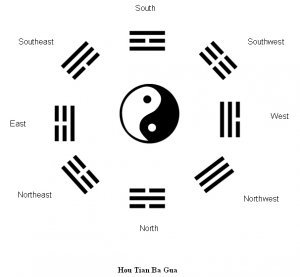 In the Xian Tian Ba Gua all the trigrams are arranged in their complimentary opposites. Heaven and Earth, Fire and Water, Thunder and Wind, Mountain and Lake. These pairings indicate perfect harmony and balance.

The Nine stars is a numerical system to classify the different qualities and personality of Qi.

Known mainly for their use in the Flying Star system, the Nine Stars are also used in the Nine Star Water method and the Nine Star Classification of Mountains as well as Nine Star Astrology and other applications.

The Nine stars are derived from the Lou Shu. the Lou Shu is an arrangement of white and black dots. The groupings of odd (white) and even (black) dots in the Lou Shu diagram are assigned a numerical value from 1 to 9.

The Nine stars are used to classify and describe cycles of time, heaven qi, earth qi, mountains and rivers as well as a person’s astrological signature.

The Ten Heavenly stems are an integral part of the 120 year Chinese Calendrical system.

The ten stems are the five phases (wu xing) of water, wood, fire, earth and metal in their yin and yang components. e.g example yang wood and yin wood.

The 10 Stems are a key component of many Feng Shui schools and are included in the 24 Mountain ring of the Lou Pan compass.

Stem and Branch combinations are the basis of Astrological and Divinatory systems such as the 4 pillars of Destiny and Qi Men Dun Jia.