I met the owners of this property in Feb 2015 for a Feng Shui consultation, they called me in as a ‘last resort’ to help them get their families lives back on track. The home is a double brick construction, built in the 1950’s, facing 125° Southeast. Both owners are Geng Yang Metal Day Masters, so facing SE, sitting NW should generally have a positive effect on their Four Pillars.

Since moving in 2007, both had suffered big problems in their careers. The husband was stuck working for a company in Sydney and having to travel every day to the Northern Beaches to work in an office with a highly toxic culture. Similarly, the wife worked in an office that was understaffed and suffering from morale problems. Relationships in the house were strained, and the husband had been suffering from depression amongst other health problems.

Having lived in a Period 5 house previously myself (with 5 water star facing, 5 mountain star sitting), my advice to the owners was to place the cures I had recommended and make a 5 year plan to sell the house and relocate to a home that had a better energy blue print.

I always make follow up calls to my clients, usually 1 month after all the cures have been placed, to check on their progress and see what reaction there is to the cures. The wife informed that she had decided to sell and would I be interested in an interview along with two other agents, of course I said yes. 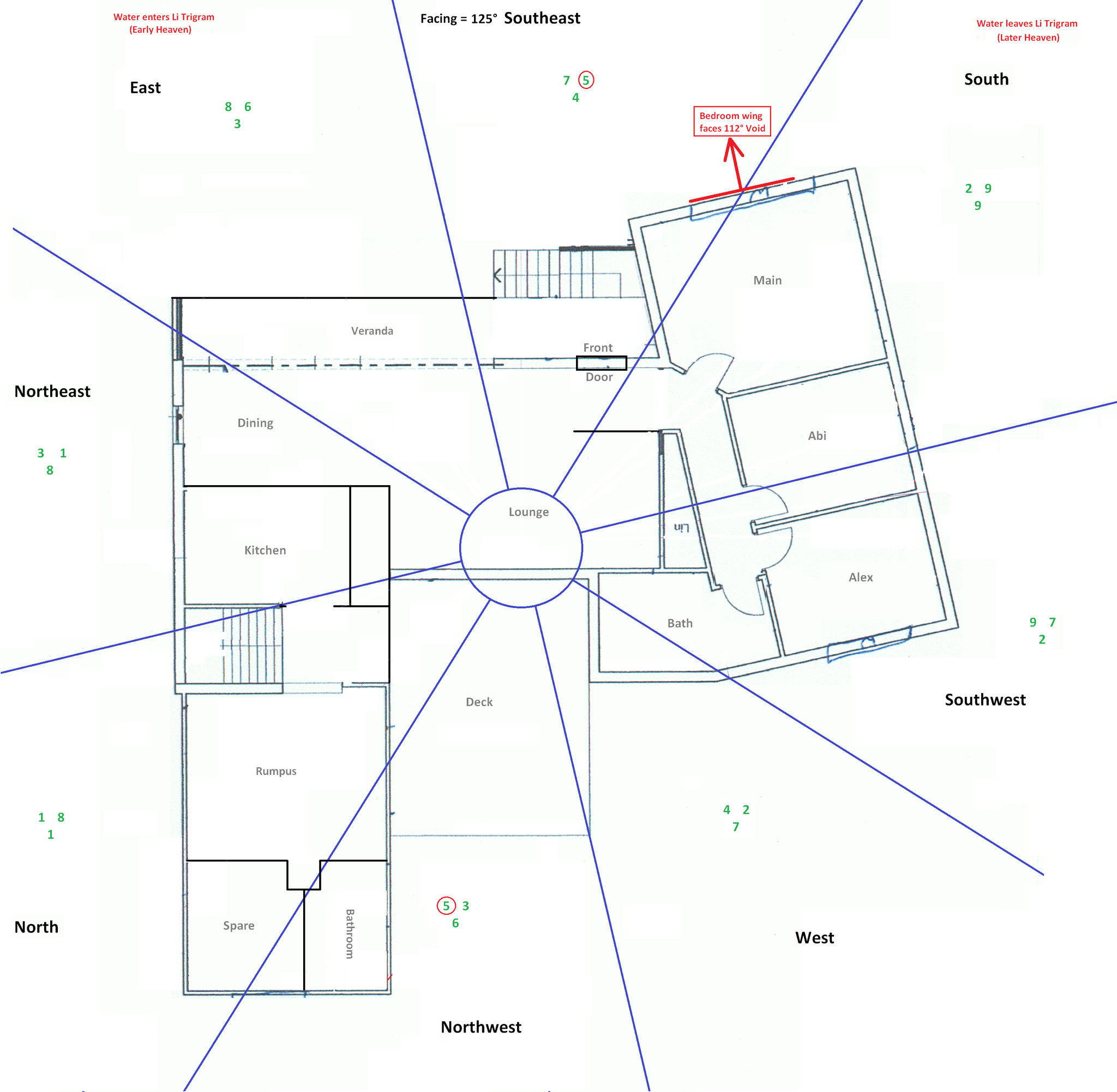 Looking at the property itself, we have – 5 water star facing with much lower ground, 5 mountain star sitting with much higher ground, 8 water star in the North restricted by mountains, 8 mountain star in the East with lower ground, a Disappearing Water formation (street enters East, leaves in the South) and the bedroom wing of the house aligned with the 112° Void Line. No wonder there are so many problems.

We decided to list the property at a price over $100,000 more than what the other agents said was possible as a result of several factors. Firstly a house close by (but not in the same street) had recently sold for a high price; secondly, the only agency to sell in the street for the last 5 years is notorious in the local industry for massively underpricing properties to get quick turnover at the cost of their vendors future; thirdly, Newcastle was following Sydney’s rapidly growing market, and lastly there was a need to get a high price due to several years of dead end jobs and financial stress. To top it all off, the wife found a house she liked and put an offer in on it, which was accepted.

Even with the cures, Saturday inspections were a struggle. Plenty of people through the door, but no offers. After 6 weeks, we dropped the price by $20,000 to help attract people, which it did, although the buyer that was attracted ended up being a problem. After three weeks of negotiating, we were still no closer to an exchange. The pressure was on!

I decided that I needed to another look at the house. I stood at the top of the garden steps in the front yard and noticed an alignment that I had missed before. The corner of the house where the angles meet lined up with the entry point for the power lines, the steps I was standing on; and then when I turned around 180° it was also aligned with the power pole and one of the water exit points. Since the main mountains for this property are in the West and Northwest, the 8 Killing Sha directions are Si and Wu. The front door aligns with Si, and this Sha line I’d noticed ran through it. 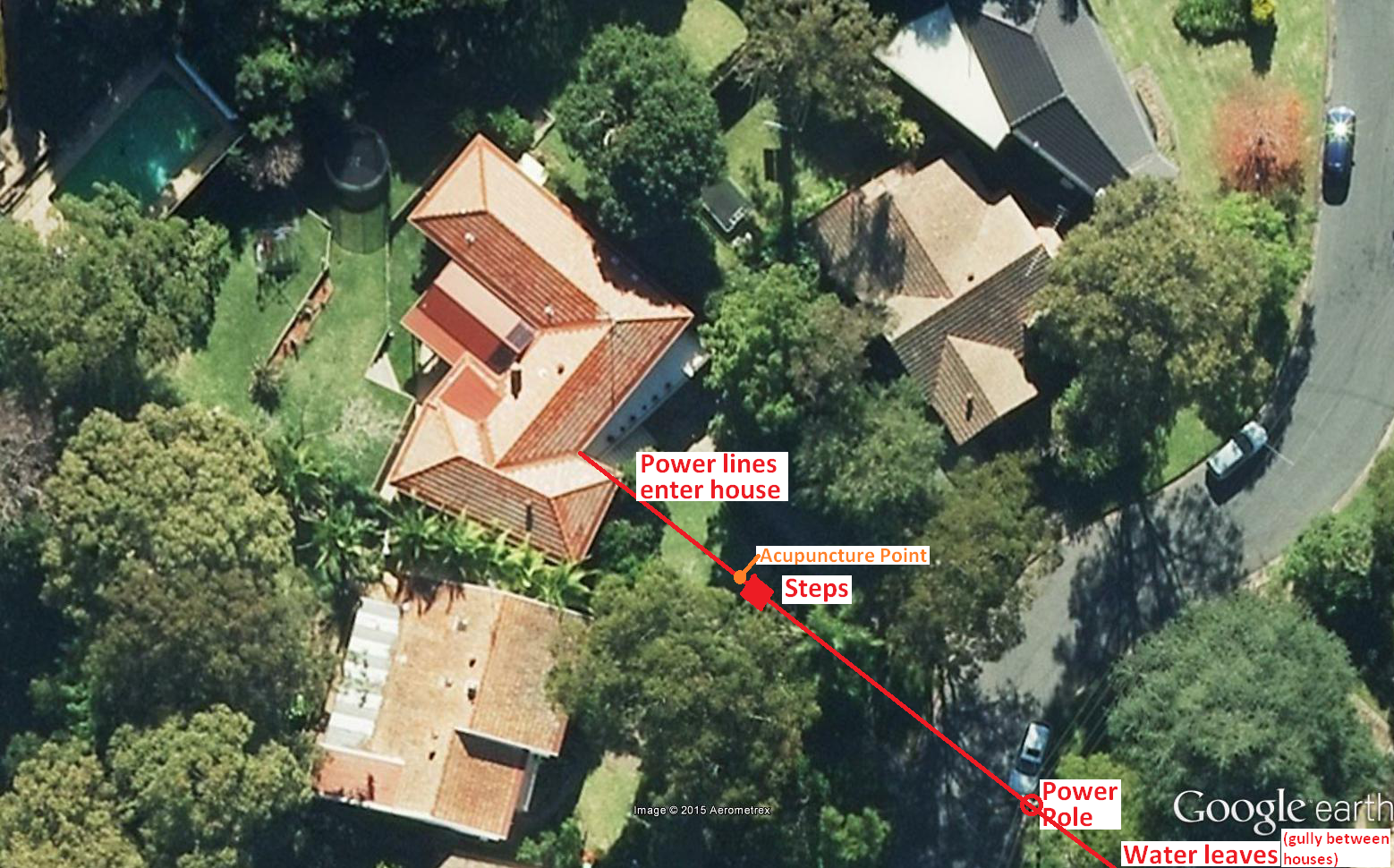 Something drastic was needed to create a positive shift. A usual cure in these cases is a Bagua Mirror that has been blessed and had the talisman on the back energised, but the forms here are very strong. Instead, I purchased a 1.5 metre length of copper pipe to use as an ‘acupuncture needle’. I’d only ever tried this once before several years ago, and I had achieved good results for that client. I also used Xuan Kong Da Gua Date Selection to choose a day and a time to drive in the copper pipe.

If you are going to use this technique, the pipe needs to be hammered in the entire way. You need to be very careful not to hit water/sewer/electrical services too. Thankfully this point was well away from all services and the ground is mostly clay in this area. With all the rain we’d had in Newcastle at the time it wasn’t too difficult.

The effects were almost instantaneous. The next open home (three days later) had the most people through so far in the campaign, and one couple immediately fell in love with the home. They booked a second appointment on the Sunday, had a pest and building inspection done on the Monday and exchanged by Wednesday. There was some fallout from the other buyer that had stalled for weeks, but the owners were extremely happy with the result. Even with all the problems, the sale beat the previous street record by $195,000.

There were some pretty good lessons to be learnt from this experience for me. Number 1 is always follow up with clients. Number 2 is never assume that you know everything, be open to other methods and systems that will get the results you want. Number 3 is if a client isn’t noticing any changes after a month or so, go back and have another look. Stand in different places and observe the surroundings to see if you missed anything.

You’ll be pleased to know that my clients’ new home is much nicer, not necessarily in appearance but in energy. The wife has found a new job that she loves and has career advancement possibilities. The husband has quit his toxic workplace and is embarking on a new career now that the financial situation allows him to study full time.